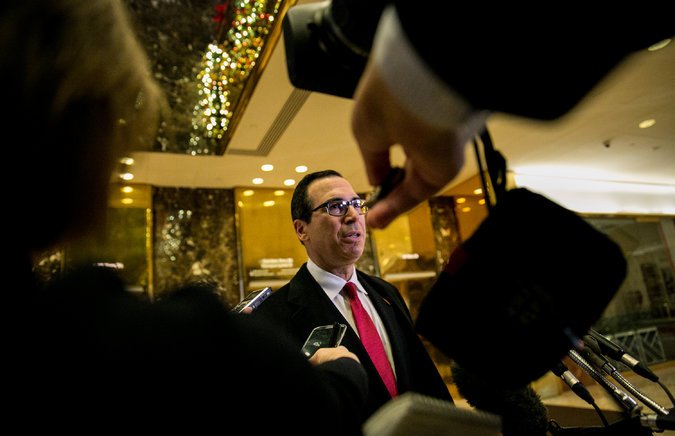 Steven Mnuchin, Donald J. Trump’s pick for Treasury secretary, has a Goldman Sachs pedigree and is a financier with a taste for high-risk, high-return wagers. CreditSam Hodgson for The New York Times

In a campaign commercial that ran just before the election, Donald J. Trump ’s voice boomed over a series of Wall Street images. He described “a global power structure that is responsible for the economic decisions that have robbed our working class, stripped our country of its wealth, and put that money into the pockets of a handful of large corporations.”

The New York Stock Exchange, the hedge fund billionaire George Soros and the chief executive of the investment bank Goldman Sachs flashed across the screen.

Now Mr. Trump has named a former Goldman executive and co-investor with Mr. Soros to spearhead his economic policy.

With Wednesday’s nomination of Steven Mnuchin, a Goldman trader turned hedge fund manager and Hollywood financier, to be Treasury secretary, a new economic leadership is taking shape in Washington.

Mr. Mnuchin will join Wilbur L. Ross Jr., a billionaire investor in distressed assets , who has been chosen to run the Commerce Department, and Todd Ricketts, owner of the Chicago Cubs, who has been picked to be deputy commerce secretary. All are superwealthy and to be overseen by the first billionaire president in United States history.

That two investors — Mr. Mnuchin and Mr. Ross — will occupy two major economic positions in the new administration is the most powerful signal yet that Mr. Trump plans to emphasize policies friendly to Wall Street, like tax cuts and a relaxation of regulation, in the early days of his administration.

While that approach has been cheered by investors (the stocks of Bank of America, Goldman Sachs and Morgan Stanley have been on a tear since the election), it stands in stark contrast to the populist campaign that Mr. Trump ran and the support he received from working-class voters across the country.

Anthony Scaramucci, a hedge fund executive and member of the Trump transition team, insisted on Wednesday that appointing wealthy investors did not contradict the campaign’s populist message.

“The working-class people of the United States, they need a break,” Mr. Scaramucci said. “And we need to switch them from going from the working class into the working poor into what I call the aspirational working class, which my dad was a member of.”

Still, Democrats were quick to attack the latest nomination.

“Steve Mnuchin is just another Wall Street insider,” Senator Bernie Sanders of Vermont and Senator Elizabeth Warren of Massachusetts said in a joint statement. “That is not the type of change that Donald Trump promised to bring to Washington — that is hypocrisy at its worst.”

So far, none of the nominees who will be shaping economic policy have any significant experience in government.

Mr. Mnuchin, 53, and Mr. Ross, 79, are both familiar with buying distressed properties and selling for a profit. But they are political neophytes with scant experience in managing large organizations. They will oversee two government agencies that together employ about 130,000 people around the world.

In the case of Mr. Mnuchin at Treasury, his experience as a principal investor who made large sums of money through high-risk, high-return wagers suggests that he will look critically at the thicket of regulations that now constrain the risk-taking activities of investment banks.

That could mean a reassessment of what has come to be known as the Volcker Rule , part of the Dodd-Frank financial overhaul that followed the 2008 financial crisis. The rule forbids banks to make certain speculative investments with their own capital.

“I would say the No. 1 problem with the Volcker Rule is it’s too complicated and people don’t know how to interpret it,” Mr. Mnuchin said in an interview with CNBC on Wednesday. “So we’re going to look at what to do with it as we are with all of Dodd-Frank. The No. 1 priority is going to be to make sure that banks lend.”

In the interview, Mr. Mnuchin also said he would look to cutting corporate tax rates as a way to increase economic growth. And he said the wealthy would not see a big tax cut.

There is a Washington tradition of presidents calling on a Goldman Sachs luminary to take the reins of the economy, including the Democrat Robert E. Rubin in 1995 and Henry M. Paulson Jr., a Republican, in 2006.

Mr. Mnuchin’s Goldman pedigree is as good as it gets, given that his father, Robert, was a pioneer in stock trading who spent 35 years at the firm.

While the Goldman brand may have initially attracted Mr. Trump, for the broader financial community it is Mr. Mnuchin’s track record at hedge and private equity funds, which is where the real money is made on Wall Street these days, that makes him appealing.

“Mnuchin as Treasury secretary is somebody who can speak to bankers — Jamie Dimon, Lloyd Blankfein, James Gorman and Brian Moynihan. He can speak their language,” said Gary Kaminsky, a former vice chairman at Morgan Stanley, referring to the chief executives of JPMorgan Chase, Goldman, Morgan Stanley and Bank of America. “He comes from a trading desk, and that’s something that is very strong,” Mr. Kaminsky, who has attended fund-raisers for Mr. Trump, added.

While there is little doubt that Mr. Mnuchin can speak the language of Wall Street, he has had little experience running large, complex bureaucracies. Mr. Rubin and Mr. Paulson had ascended to the top at Goldman, and had many years of experience managing people and organizations under their belt.

Mr. Mnuchin did assume a leading role in the restructuring and reinventing of IndyMac, now known as OneWest, a California mortgage giant that collapsed in 2008. He and partners acquired the firm and later made billions.

After he moved from New York to the West Coast, Mr. Mnuchin was targeted by protesters who claimed that the bank was too quick to foreclose on struggling homeowners. Last year the bank was sold to the CIT Group, a small-business lender run at the time by another Goldman Sachs alumnus, John A. Thain.

In a statement announcing his economic appointments, Mr. Trump highlighted the deal. “He purchased IndyMac Bank for $1.6 billion and ran it very professionally, selling it for $3.4 billion plus a return of capital,” he said of Mr. Mnuchin. “That’s the kind of people I want in my administration representing our country.”

Mr. Mnuchin has faced other controversies. In 2010, he and his brother, Alan, were sued over their mother’s early investment with Bernard L. Madoff, an investor who was convicted of running a Ponzi scheme . The lawsuit, filed by a trustee for Madoff victims, alleged that $3.2 million of the money Mr. Mnuchin withdrew from his mother’s account shortly after she died belonged to other victims. The lawsuit was dropped last year because of a time limit.

Hollywood has been another reinvention for Mr. Mnuchin.

In 2006, he and a partner, Chip Seelig, struck a deal through their company Dune Entertainment to invest $325 million in 28 movies produced by 20th Century Fox. It was a successful partnership; Fox delivered hits (made in part with Dune’s money) like “Avatar,” which took in $2.8 billion worldwide in 2009.

After breaking with Mr. Seelig in 2012, Mr. Mnuchin teamed up with a company called RatPac, owned by the rowdy filmmaker Brett Ratner and the Australian billionaire James Packer. Mr. Ratner was then notorious in Hollywood; he resigned as a producer of the Academy Awards in 2011 after using an anti-gay slur at a public event and making frank remarks about his sex life on Howard Stern’s radio show. (He apologized .) But together the three men formed a vehicle to invest $450 million in an extensive array of Warner Bros. movies.

Some have been major hits, like “Gravity,” which took in $723.2 million. But there have also been money losers, including “Pan” and “In the Heart of the Sea.”

Still, Mr. Mnuchin has clearly enjoyed a Hollywood lifestyle, whether attending celebrity-filled parties at the Hôtel du Cap-Eden-Roc during the Cannes Film Festival or going in with a movie industry friend to buy a Dassault Falcon 50 jet (since sold). He can currently be seen in a cameo — playing a Merrill Lynch executive — in Warren Beatty’s new movie “Rules Don’t Apply.”

Beyond the entertainment industry, there other similarities between Mr. Trump and Mr. Mnuchin. They are both twice divorced, and their third partners are decidedly younger. (Mr. Mnuchin’s fiancée is Louise Linton, a 34-year-old actress from Scotland.) They also both have a taste for landmark Manhattan real estate: Trump Tower for the president-elect and 740 Park Avenue for Mr. Mnuchin.

But there are differences, too. Despite his Hollywood appetites, Mr. Mnuchin is described by people who know him as slightly awkward and not one to command a room. Friends of the two men describe them more as social and professional acquaintances than close friends.

The names of flashier prospects had been floated as possible candidates for Treasury, according to a fund manager close to the president-elect’s economic brain trust. Among them: Henry Kravis of Kohlberg Kravis Roberts & Company, Jonathan Gray of Blackstone, Jamie Dimon, Mitt Romney, and Thomas J. Barrack Jr. of Colony Capital, a Los Angeles-based real estate investor who has been close to Mr. Trump for decades.