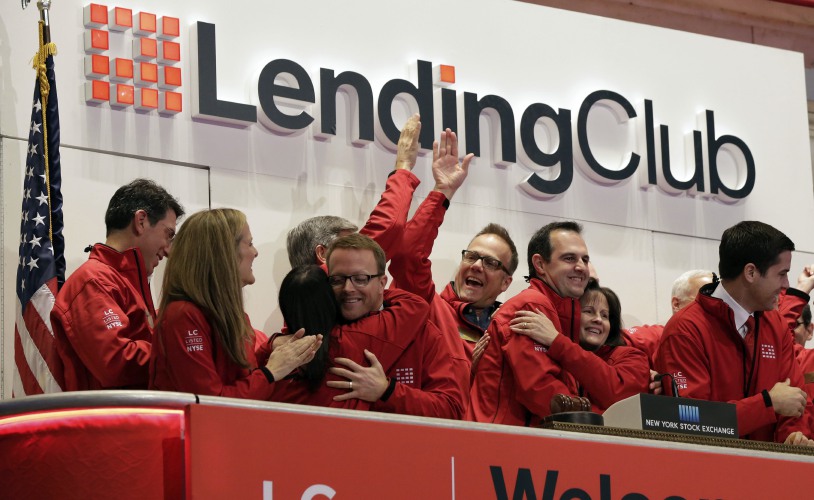 In this Dec. 11, 2014, file photo, Renaud Laplanche, third from right, Founder & CEO of Lending Club, embraces company CFO Carrie Dolan during opening bell ceremonies of the New York Stock Exchange, to mark Lending Club’s IPO. Silicon Valley is pressuring banks to change their ways or risk becoming the latest industry overtaken by technology. Hundreds of startups are offering easier and cheaper ways to save, borrow, spend and invest. Few of the startups have ever posted a profit, and one of the biggest, the Lending Club, is trying to recover from a breakdown that triggered Laplanche’s resignation as CEO earlier in 2016. (AP Photo/Richard Drew, File)

San Francisco — It may not be much longer before bank branches join video-rental stores and record shops as relics of a bygone era.

Silicon Valley is pressuring banks to change their ways or risk becoming the latest industry overtaken by technology. Hundreds of startups are offering easier and cheaper ways to save, borrow, spend and invest. They are doing it by shifting the battleground to smartphone apps and websites, which function as digital offices that are accessible around the clock with minimal staffing, and by lowering fees.

Given how much customers dislike it, the financial services industry seems ripe for “disruption,” as Silicon Valley likes to call industry upheaval. These financial technology, or “fintech,” startups may also soon get further validation from a key banking regulator. Comptroller of the Currency Thomas Curry last week announced plans for a special national bank charter that would allow fintechs to offer their products without having to get regulatory approval state to state. Part of Curry’s motivation lies in his belief that fintech can help consumers who either don’t want or can’t afford to establish accounts with traditional banks.

At this point, the fintech sector hasn’t proven it can be a viable or trustworthy alternative to traditional banks and stock brokerages. Few of the startups have ever posted a profit, and one of the biggest, the Lending Club, is trying to recover from a breakdown that triggered the resignation of CEO Renaud Laplanche earlier this year. The Justice Department is investigating the events that led to Laplanche’s abrupt departure.

“The disruption in banking is coming later than other areas because of the complexity of the regulations and the amount of trust required,” Laplanche said in an interview earlier this year, while he was still CEO. “Trusting you with my savings is not like booking a trip online.”

Banks, meanwhile, have demonstrated their resiliency and resourcefulness. With the help of taxpayer-backed bailouts, the industry has survived a financial crisis of its own making, and now appears to be tackling the fintech threat. They are closing branches, laying off workers, pouring money into their own technology departments and even buying or teaming up with fintech startups.

Taking the Threat Seriously“Whenever I talk to big banks, they ask, ‘What are the disruptors doing? Which of their ideas can I copy?’ ” said Forrester Research analyst Oliwia Berdak.

A recent survey of the financial services industry by the research firm Gartner Inc. found that 70 percent of respondents considered fintech startups to be a bigger threat than their traditional rivals.

With their guard up, the much bigger banks are more likely to drive many of the fintech startups out of business if they don’t acquire them first, says Gartner analyst Rajesh Kandaswamy. But even in that scenario, he predicts “many of the ideas coming out of fintech will survive in one way or another, which will be beneficial for consumers.”

About $850 billion in consumer banking revenue in the U.S. alone is at stake. Fintech captured just 1 percent of that last year, according to a Citibank study. By 2023, though, Citibank expects fintech to control 17 percent of a $1.2 trillion market.

Emboldened by predictions like that, fintechnologists tend to be brash, like many of the entrepreneurs who have successfully reshaped other industries.

A Big, Bold Approach“During the next 10 years, we are going to create an international company that will be like nothing the financial services industry has ever seen,” boasts Baiju Bhatt, co-founder of Robinhood, a stock brokerage that does not charge any commissions for its more than 1 million customers to buy and sell shares. To make money, Robinhood recently introduced a $10 monthly service that allows trading when the stock market is closed and offers higher borrowing limits.

At Affirm, an online lender, CEO Max Levchin is attempting to reshape finance for a second time after making his first big splash in Silicon Valley as a co-founder of PayPal, a digital payment service born in the 1990s.

Helped by his pedigree, Levchin has raised $525 million to back Affirm’s focus on consumers who do not like or cannot get credit cards. Instead of providing a revolving line of credit with high interest rates that compound, Affirm has developed its own formula to identify borrowers able to repay loans in equal installments in time frames ranging from three months to one year. Affirm also refuses to charge fees for late payments, to further distinguish itself from banks and other credit card issuers.

“I just don’t think you can run a business by screwing your customers these days,” Levchin says. “I would like to think we are returning to what lenders are supposed to do.”

Customers Still Aren’t Totally SoldAlthough many consumers rarely expect big banks to act in their best interests, they typically consider them to be a safer place to keep money because of their long histories in business, says Forrester’s Berdak.

Like the big traditional banks, most digital-only banks also offer government-backed insurance on deposits, but Berdak said that is not enough to overcome lingering doubts about their long-term prospects. Lending Club, for instance, has been operating under a cloud since revealing that paperwork for $3 million in loans had been falsified under Laplanche’s leadership. Laplanche declined to comment about circumstances surrounding his resignation.

Investors Are Skeptical, TooAlthough Lending Club was considered one of the most promising fintech companies, its stock has been hammered. The shares are hovering about 60 percent below their initial public offering price of $15 in 2014.

Most fintechs are still mining venture capitalists and other financiers as they try to gain a foothold. More than $50 billion has been invested in the sector since 2010, with all but $10 billion coming in the last 2½ years. Even some of those investors believe fintechs may be underestimating the degree of difficulty facing them.

“I am a believer that the bank of the future will be a collection of apps on your phone, but I also believe there is a lot of hubris underlying the idea that it’s easy to create a bank,” says Savneet Singh, who has invested in about 10 fintech startups so far. He is also founder and president of GBI, an online exchange for trading gold and silver.

Unlocking a Young MarketFintech’s target market so far has been the millennial generation, the 18- to 34-year-olds who typically have a deeper attachment to their smartphones than any bank.

They are customers like Fred Miller, who opened his first account as a teenager a decade ago and quickly became disillusioned with the array of fees charged for everything from late payments to ATM withdrawals.

After years of frustration, Miller defected to Simple, a digital bank that Australian immigrant Josh Reich started in 2010 after concluding that U.S. banks “went out of their way to screw customers out of their money.”

Besides eschewing service fees, Simple also offers money management tools that help their customers set aside money. Miller, an Indianapolis resident, credits those tools for helping him and his wife, Emily, repay $30,000 in student loans and squirrel away enough money for a trip to New Zealand earlier this year.

Miller doesn’t think it would have happened had they kept their money in a traditional bank. “I never really understood how a bank could let me spend money that wasn’t in my account and then charge me a fee for it,” Miller says. “How is anyone supposed to get ahead in life if their bank is not friendly to them?”