Linda McMahon Backed Revamp of SBA, Which She Has Been Picked to Lead 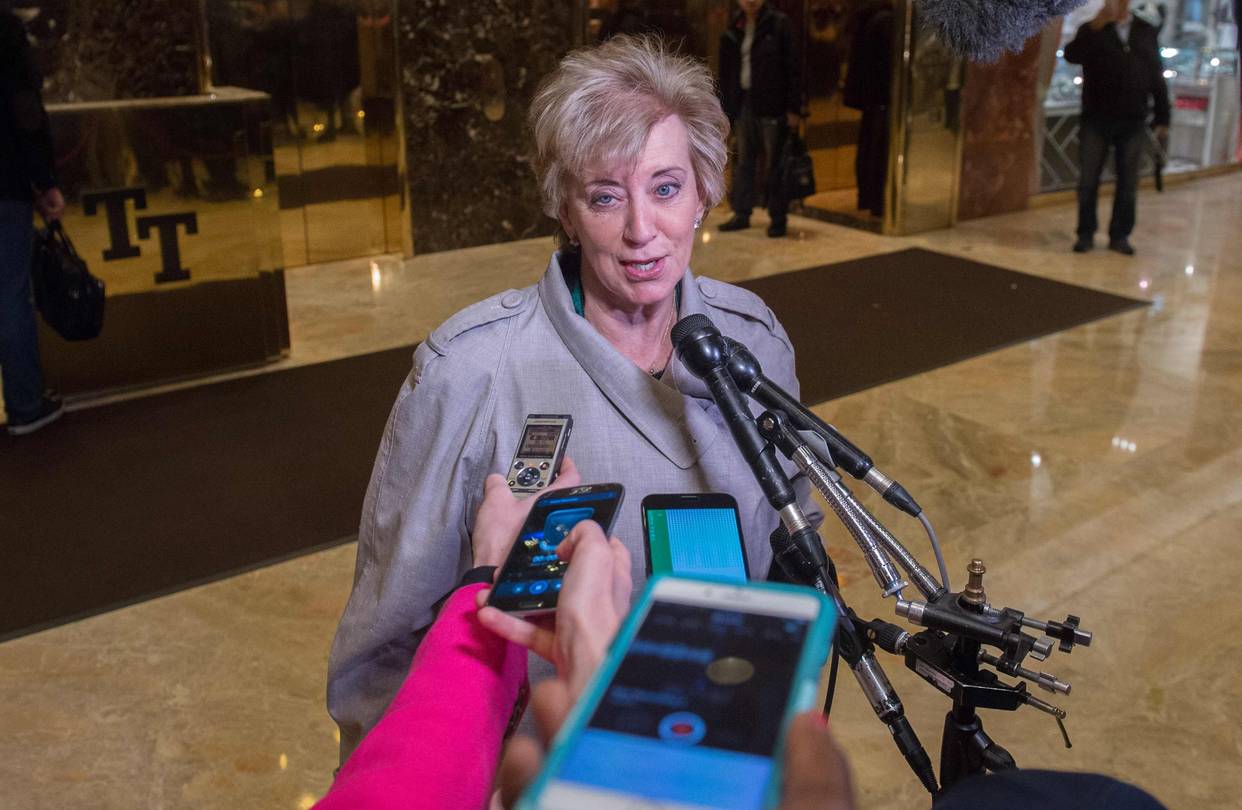 Linda McMahon, President-elect Donald Trump’s pick to run the U.S. Small Business Administration, once supported a plan that could have eliminated the cabinet seat she is now slated to hold.

Ms. McMahon, a co-founder of World Wrestling Entertainment Inc., twice unsuccessfully ran for a Senate seat in her home state of Connecticut. As part of her 2012 campaign, her economic plan called for getting rid of “outdated/ineffective and duplicative programs,” and expressed support for a 2012 proposal by President Barack Obama to merge the SBA, the Commerce Department’s core functions and four other entities into one unit .

A spokeswoman for Ms. McMahon, 68 years old, declined to comment on any issues related to the SBA before confirmation hearings.

As head of the SBA, Ms. McMahon would oversee an agency with a budget of more than $10 billion that last year approved more than 70,000 government-backed private-sector loans. The SBA also provides mentoring and counseling, and oversees federal disaster-relief programs.

Ms. McMahon and her husband, Vince, bought his ailing father’s wrestling business in 1982 and took the company public in 1999. The WWE, which had $659 million in revenue last year, grew by developing a cast of larger-than-life chiseled villains and heroes who seemed drawn from comic books.

Since stepping down as chief executive in 2009, Ms. McMahon has turned her attention to politics and to promoting women’s leadership and entrepreneurship. The couple still own a controlling stake in WWE, where Mr. McMahon serves as chairman and CEO.

The McMahons also were large donors to the Trump Foundation, according to tax records.

In announcing the nomination on Wednesday, Mr. Trump called Ms. McMahon “one of the country’s top female executives advising businesses around the globe. She helped expand WWE from a modest 13-person operation to a publicly traded global enterprise with more than 800 employees in offices world-wide.”

Ms. McMahon ran two of the most expensive U.S. Senate campaigns in American history. She spent about $100 million combined, mostly from her personal fortune, but lost to Connecticut’s longtime attorney general Richard Blumenthal in 2010 and then-Rep. Chris Murphy in 2012, both Democrats.

In her 2012 campaign, Ms. McMahon pitched herself as a job creator and called for reductions in federal spending. “If a program is effective and needed it will continue; but if it is not, it should be revised or canceled,” according to her campaign literature.

President Obama’s proposal to combine the SBA with other entities “really never gained traction,” said Tony Wilkinson, president of the National Association of Government Guaranteed Lenders. “I think there was a concern that it would get buried in the Department of Commerce and that small-business issues needed their own agency,” he said.

Ms. McMahon has called for reducing financial regulation, stating that Dodd-Frank financial reform “has significantly increased the costs and reduced the viability of small, community banks upon which Connecticut’s small businesses rely for business loans.”

Moreover, her platform included cutting the top business tax rate to 25% from 35%, allowing businesses to deduct 100% of capital expenses.

In addition to her political activities, Ms. McMahon has focused on moving women into leadership positions, an area some familiar with her work believe will be a priority at the SBA.

Ms. McMahon is the co-founder and chief executive of Women’s Leadership Live, a two-year-old startup that focuses on leadership opportunities for women. Sessions for a conference held in Salt Lake City in October included “Thrive Through Disruption” and “Owning Your Impossible and Learning to Fly,” plus a “Shark Tank”-like business pitch competition.

“Linda has always been a supporter of women business owners and entrepreneurs in Connecticut,” said Fran Pastore, chief executive of the Women’s Business Development Council in Stamford, Conn., which has received funding from Ms. McMahon. “I am anxious to see how she will grow the SBA and that particularly.”

Ms. McMahon’s business record became an issue in both of her Senate campaigns. After a complete list of her creditors from a 1976 bankruptcy filing was published in a local newspaper during her 2012 bid, she paid off the earlier debts.

In 2010, Ms. McMahon bungled an answer about the minimum wage at a press conference during that year’s Senate race. Opponents, including Democrats and labor unions, accused her of being out of touch with workers.

Ruth Simon and Ted Mann, “Linda McMahon Backed Revamp of SBA, Which She Has Been Picked to Lead” Wall Street Journal, December 12. 2016. Accessed via: http://www.wsj.com/articles/linda-mcmahon-backed-revamp-of-sba-which-she-has-been-picked-to-lead-1481503897