Seeds of a Fintech Start-Up Sometimes Come From the Trenches 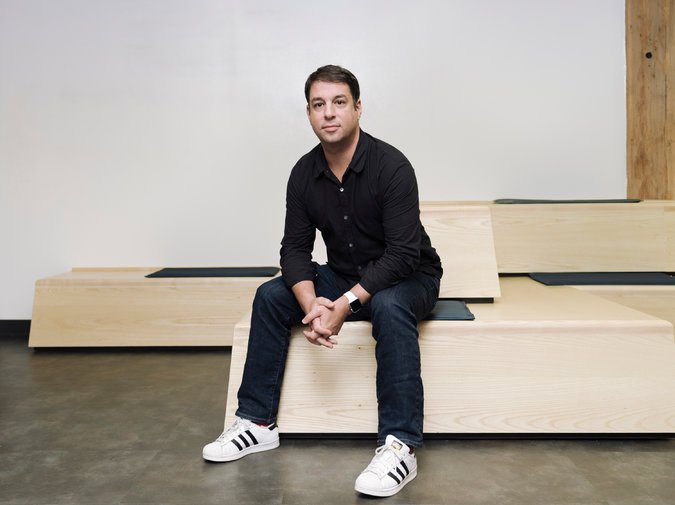 David Lyon, 41, needed a simple way to effectively communicate with clients about changes in their portfolios or financial plans, and created Oranj. CreditWhitten Sabbatini for The New York Times

Who says the most useful start-up ideas come from millennials fresh from dropping out of Stanford?

Some recent tech-based financial innovations haven’t come from venture capitalists or young hotshots but rather from professionals who have toiled away in their industry for decades.

Sheryl Rowling, 60, is a financial planner in San Diego who was constantly overwhelmed by the complexity of rebalancing her clients’ portfolios. In portfolio management, rebalancing requires periodic adjustment of client holdings to a preset target of stocks, bonds and cash assembled to meet their goals while minimizing taxes.

Although advisers need to keep clients on track with investment goals, rebalancing is often tedious and complex. The process was even more demanding because Ms. Rowling placed high priority on incorporating tax-saving strategies as well. Over the years, she realized that portfolio rebalancing could be automated with the right software.

About 10 years ago, her firm was one of the first to put in place one of the early rebalancing software solutions. The software cost $50,000 a year and it took two people 20 hours a week for six months to gear up.

When the future of that program became uncertain, Ms. Rowling decided there had to be a better way. She figured if she could design a simpler, more affordable, tax-savvy solution for her own firm, it would also be useful to others.

“Most bread-and-butter advisers couldn’t afford six months and $50,000 a year to automate rebalancing,” Ms. Rowling said. “I thought there could be a better, more affordable solution.”

Although Ms. Rowling had no experience in software coding, she assembled a team to create a program. She financed the development using revenue from her advisory practice, which now has $270 million in assets under management.

In 2007, the product that emerged was Total Rebalance Expert, or TRX, which automates the rebalancing process for advisory firms and saves clients money on taxes.

Several years later, Ms. Rowling’s company caught the attention of Morningstar , the Chicago-based financial information giant. It was so impressed with the product that it acquired Total Rebalance Expert last November for an undisclosed amount. At the time of the acquisition, more than 500 advisers from 175 firms used the software to rebalance some $20 billion in client assets.

Ms. Rowling epitomizes the model of the internal start-up. Unlike the typical profile of a tech-oriented millennial, some entrepreneurs are middle-age, have been in a profession for decades and never thought they would be creating in-demand software.

Companies like these eschew the traditional route of angel and venture-capital investing after running businesses for years.

David Lyon, 41, who was a Chicago-based registered investment adviser, followed a similar path. A few years ago, he realized that he needed a simple way of effectively communicating with clients about changes in their portfolios or financial plans.

Client communication can often be a problem in the financial advice business. Advisers need to connect with clients regularly, particularly when there are market blips. But busy clients are hard to pin down for a phone call or office visit and may only be seen twice a year for face-to-face review meetings, according to a survey by the Financial Planning Association .

To address that, Mr. Lyon started building his own software in 2012. He had a workable package a year later.

What emerged was Oranj, a cloud-based platform that “allows advisers to maximize time and provide the same level of service across account size.”

When some 50 other advisory firms heard about his software, they wanted it, too. He charges other companies a one-time setup fee of $500 plus $250 a month for the first user and $100 for each additional user. Mr. Lyon said his tool allowed advisers to connect with 73 percent of their clients each year for annual reviews, a vast improvement from the 46 percent that the average practice did, according to the Financial Planning Association survey.

Like many professionals engaged in their own start-ups, Mr. Lyon also self-financed, or “bootstrapped,” the development of Oranj. He eventually sold his advisory practice to focus on Oranj.

He would not disclose revenue for his platform, but said his sales growth was 225 percent year-to-date since 2015. He has hired 47 employees and serves 400 advisory firms.

Oranj has plenty of competition: There are dozens of advisory platforms on the market, but Oranj helps advisers avoid conflicts of interest, Mr. Lyon said.

The platform lets advisers track every client email, call and portfolio change on one “dashboard” page. And clients receive investment advice that’s “agnostic,” that is, not wedded to one investment manager.

Still, not every adviser will find it easy to break into the so-called fintech, or financial technology, field. The sector is already crowded and is hyper-focused on moving money , not managing it.

According to PricewaterhouseCoopers, the global consulting firm, funding for fintech start-ups doubled from 2014 to 2015, from $5.6 billion to $12.2 billion. Most of that money, though, is going to companies targeting financial infrastructure such as consumer banking and fund transfer and payments.

More opportunities may lay, at least according to PricewaterhouseCoopers, in the area of asset and wealth management, an industry slow to change.

Some overhauls are coming about as a result of the Labor Department’s recent rule mandating that financial advisers offering retirement advice act in the best interests of clients.

Under the new “fiduciary” rule , which goes into effect in April 2017, advisers must show that they are not giving conflicting advice in the products or advice they offer.

It has been widely speculated that the Republican-dominated Congress and White House will challenge it or roll back the rules. But until that happens, millions of financial advisers, brokers and agents are setting out to meet the conditions of the rule.

As a practical matter, this means that advisers must also be able to prove to a regulator that an investment is in the best financial interests of their client and not done just to generate a commission for the adviser.

Despite the intense competition to provide financial advice, these start-ups have many opportunities to tap. For example, most of the new “robo-advisers” that provide automated advice on investments are not set up for customized advice on portfolio, tax, estate and post-retirement planning.

And older clients need to optimize Social Security benefits, manage retirement withdrawals, monitor tax efficiency and keep up with their investments. Those create openings for advisers who can come up with practical solutions in-house, a growing trend in recent years.

For professionals seeking to start a business, getting off the ground can be the most difficult part.

Ms. Rowling said she went into her start-up “naïvely and didn’t realize the extent to which technology had to change.” She also realized that her project took more capital and time than she imagined. In addition, after feedback from customers, she had to make adjustments.

Ultimately, though, sometimes solving everyday problems left her feeling at the forefront of entrepreneurship.

“It requires a lot of capital to create something there’s a wide need for,” Ms. Rowling added. “Always be on the cutting edge.”